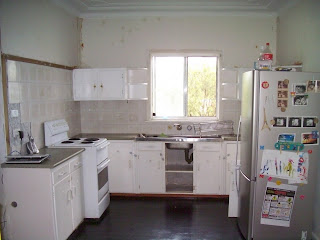 The missing door: poor bugga nearly made it. Was hanging on by one tiny nail. But Steve kept forgetting its state and it fell on his foot one time too many and spent its last few days beside the fridge.

It might well have been. But unfortunately it can’t claim this distinguished title because it NO LONGER EXISTS!!!! It’s sitting all partly smashed up on my front sandpit (what pathetic grass we had has been fried in the heat). And it’s never looked better. Even Z is glad to be rid of the “kitchen mess” as he calls it. Gee, do you wonder why I never posted pics of this room? I’m completely embarassed to show this, but seeing that it’s all in the past, let’s have a laugh, shall we? Yes, I’ve put up with this for five years. My medal better be in the mail…

* I painted the doors white when we moved in because I couldn’t imagine living with green doors for any amount of time. I did such a crap job, I was wishing for the green to come back.

* The previous owner’s son thought himself a handyman. He wasn’t. He installed the taps himself did such a bang-up job they didn’t work properly. They were replaced numerous times and ground back and had lots of work but no makeover could save the cold one which exploded one day. I’m so used to using warm/hot water for everything I rarely turn the cold water tap on in the bathroom. He also cut a hole too big for the tap nozzle and didn’t bother doing anything about it. My non-handyman husband figured expanding filler would do the trick temporarily. It sealed the hole, but, well, look at it! Ugh.

* The tiles are on big sheets of some asbestos-ridden material and weren’t the same depth as the rest of the wall, so there was a weird uneven gap no one ever bothered fixing. I don’t remember how the piece of wood make its way there but there it is! 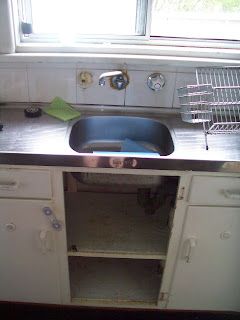 Hmm, what’s sadder? The contact-covered sheets? The mssing door? The paper towel stuffing the hole where the cold water tap used to be? The lovely aged yellow stains or the fish plug that for some INSANE reason I never replaced?????? 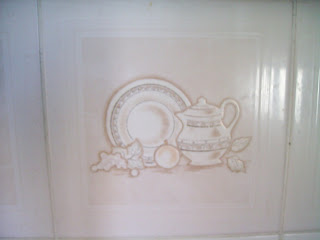 One of the delightful tile prints I could admire while cooking. They clearly shopped at the Ugly Tile Shop – same place they got the sunflower tiles that were in my old bathroom! 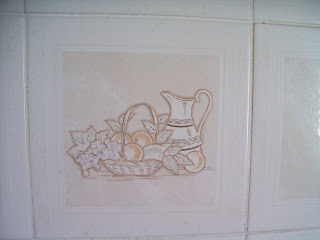 On a happier note, I did wonder if I was utilising the space enough with the new design. Would I fit everything in? Considering I was ruthless and thew out half the contents of the kitchen cupboards as well, I have a feeling I’ll be just fine. Aside from another bag out of sight, this is all I have! I sense a shopping spree coming on! 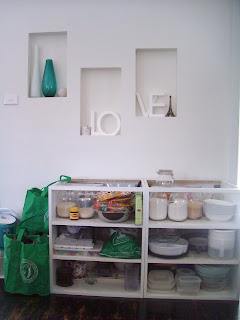 I started building the cupboards so I had something to store it in. Four packages down, 48 to go…

So I was feeling the pressure with all your “can’t wait to see the new kitchen” comments. But I guess, looking at this, anything is going to be a huge improvement isn’t it?